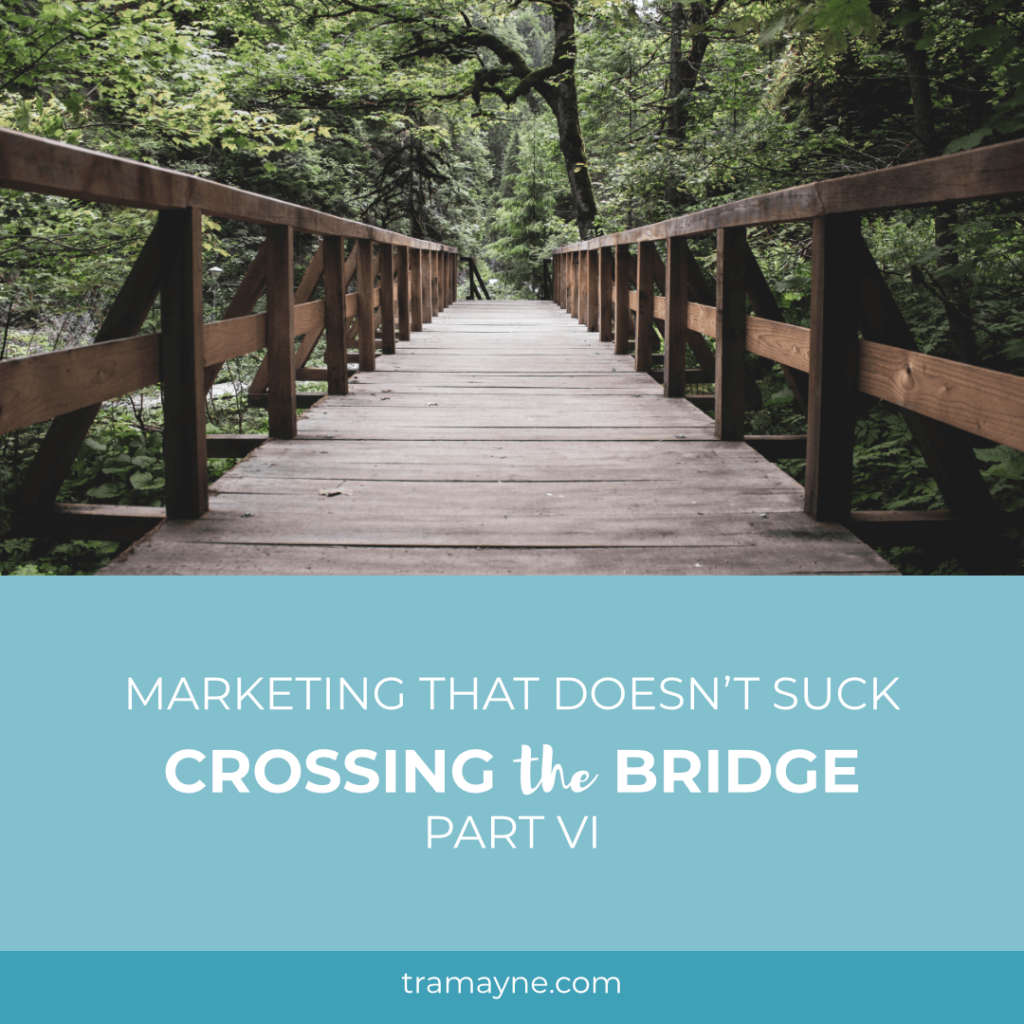 The hate is real.

So many coaches admit to me how much they hate marketing themselves.

From the outside, marketing looks like a hodge podge of stuff that either seems outrageously salesy or dreadfully complicated.

But if you’re open-minded, I want to share a different perspective.

Because marketing doesn’t have to feel this way.

The reason it seems awful is because the tools of marketing have been around for ages.

Which means that just like with anything else, scammy people have gotten their hands on these tools. And they’ve given marketing a bad name.

But the reality is, every business has to market. There’s no getting around it.

That’s because marketing is really just getting people to know about you.

If they don’t know about you, they can’t buy from you.

Which is why the final building block is your marketing approach. 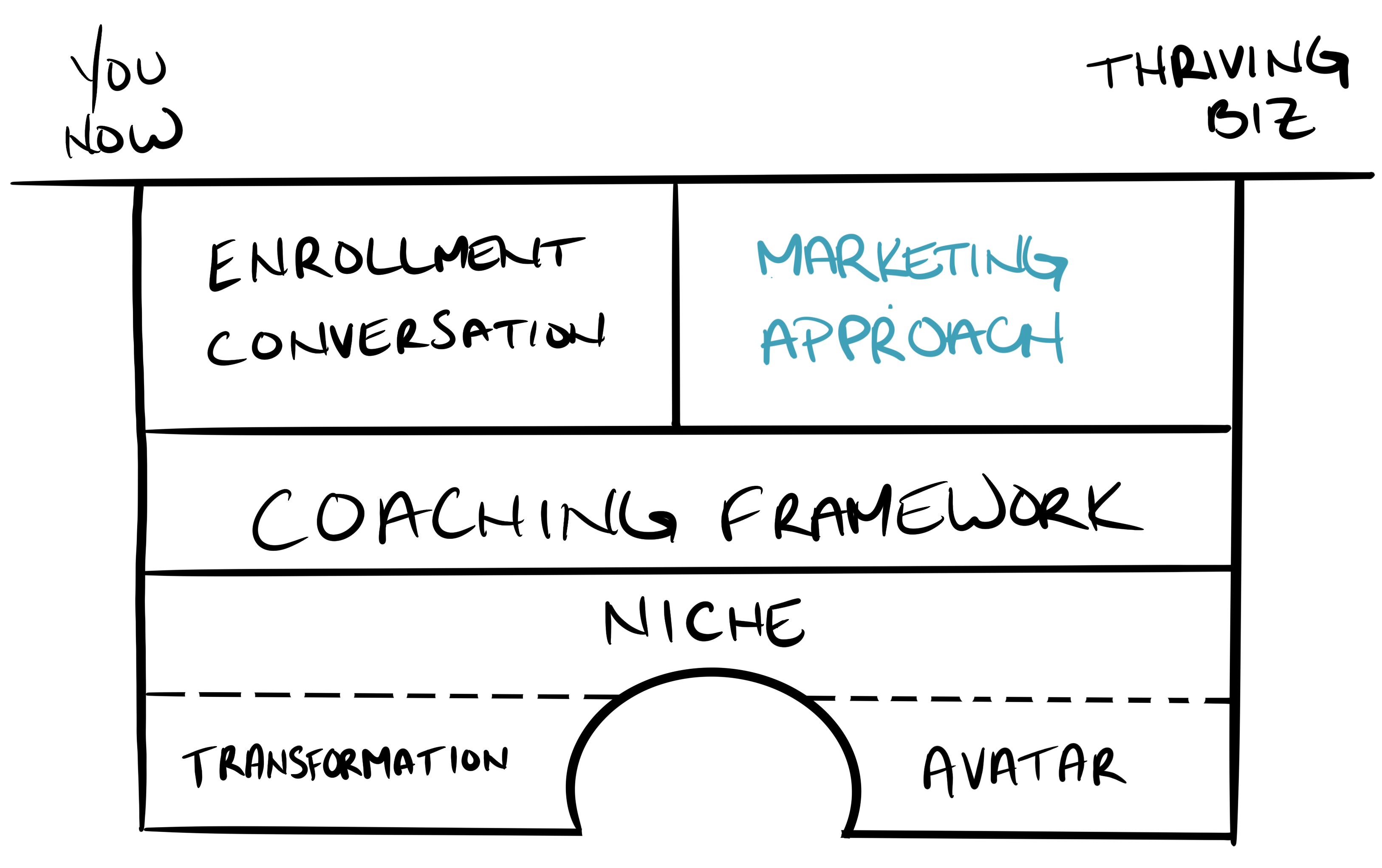 Here’s the good news. There’s no rule that says you have to market badly.

In fact, the best way to grow a sustainable business is to market authentically and realistically. Without using hype or puffed-up claims like some do.

Sure, ‘flash in the pan’ stuff and huge promotional claims works.

But let me clue you in on a dirty little secret.

Behind the scenes, those scammy companies have a gigantic refund rate.

They’re forced to make huge claims because they know 40%+ will refund. They’re going to burn through a lot of customers who will never purchase from them again.

Marketing doesn’t have to suck.

In fact, it can feel just as natural as coaching and teaching and helping people.

Think of marketing as a continuum. You coach and teach. They invest in your coaching. And then you keep on coaching and teaching.

It’s effective when you do it the right way.

Because there’s something else you need to understand.

As a coach, you’re selling a high-end service. Not a $7 widget.

A small percentage of your market will be ready to get help now.

But the majority won’t.

That’s because your market is made up of people who will invest in coaching at some point.

That doesn’t mean now. Which is why “no” rarely means “never”. It just means “not yet”.

Because maybe right now they’re just not ready to invest. Maybe they haven’t gone through a “trigger event” that flips their pain from being a later thing to a now thing.

The reality is, you can’t convince people to change who aren’t yet ready to make that transformation. And that’s okay.

Continue to teach and build the relationship. And then when they’re ready, you’ll be top of mind.

That’s what the scammy internet marketers don’t get. They treat their list badly and get irritated when people don’t buy right away.

But just because someone doesn’t buy now doesn’t mean they never will.

For a good portion of your audience, no amount of ‘persuasion hacks’ will get someone to buy. They’re just not ready yet.

So keep on coaching and teaching.

When they’re ready, you’ll be the coach they want to work with.

Where We Are & Where We’re Going

Over this series, we’ve covered the five essential building blocks of your Coaching Bridge.

This bridge is how you cross from where you are, to actually getting to enjoy a profitable and freedom-filled business. One that gives you the time and financial freedom to do whatever you want.

Now I want to help you implement all five of these so you can have the coaching business of your dreams.

Which is exactly why I created The Coaches Accelerator.

In The Coaches Accelerator, I show you how to market in a way that is perfectly suited to you -- your strengths, personality, and genius.

You’ll get people to know about your coaching services so you attract people who are ready for help right now… And also nurture the relationship with potential clients so they become paying clients in the future.

How to turn a cold outreach into an ice cold contact

The 3 components of a successful coaching practice