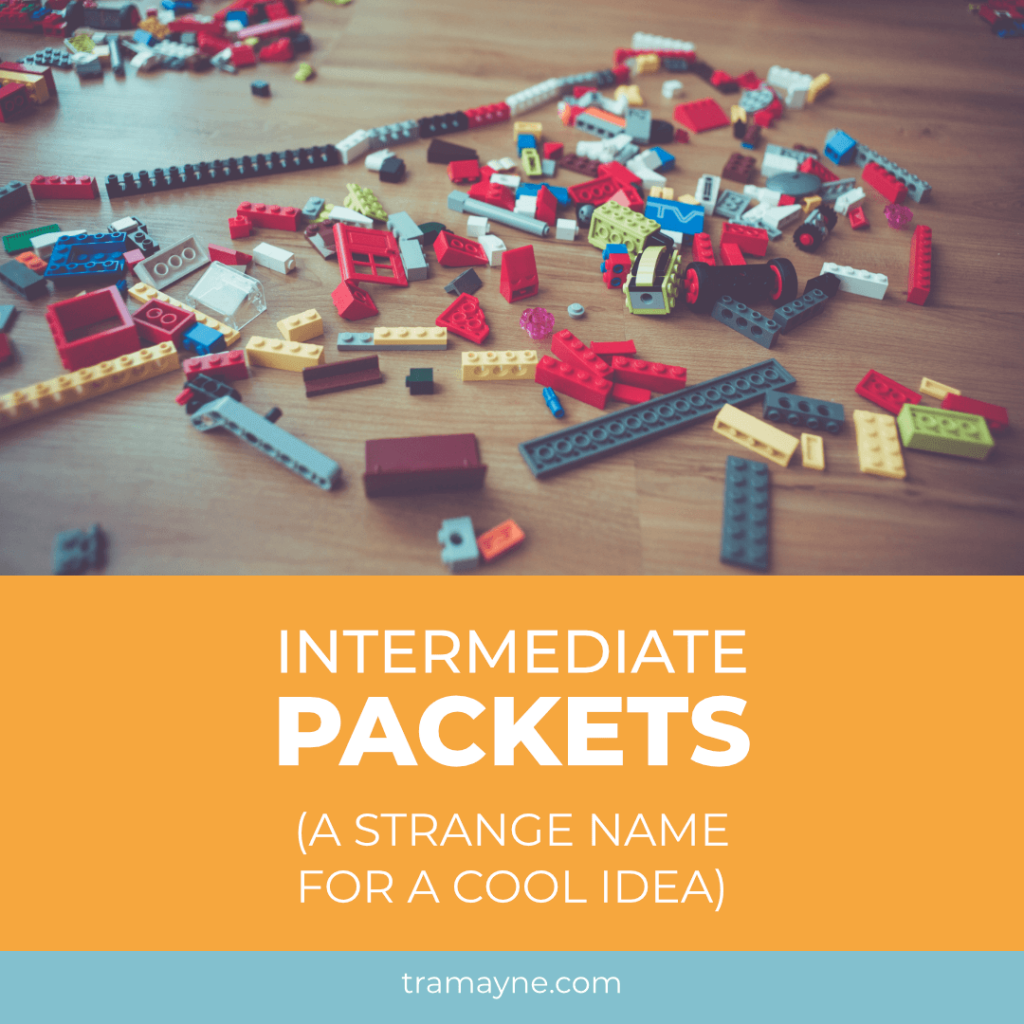 Intermediate Packets (A Strange Name for a Cool Idea)

I came across this concept of Intermediate Packets by Tiago Forte this week and I wanted to share it with you because it's one of the coolest ideas I've come across in a while.

Warning, though, because it's brand new to me and I'm in the process of figuring out all the ways it can be used, this post is going to be me thinking out loud a bit.

At first read, you might be thinking, "Well, yeah, duh. Isn't that what tasks are?"

And I would say, yes.

But the idea of intermediate packets takes it even further.

Think of it like Lego blocks. A Lego block can be used to create a building one day and a car the next.

Remember in school when you had to write essays?

Remember how fun they were?  😉

Imagine that instead of looking at a blank screen thinking, "I've got to start this essay," you thought of the essay in terms of being a series of intermediate packets.

Then writing the paper just becomes assembling the intermediate packets together.

But it gets even better.

Now imagine that each of your topic sections was its own little unit and could be reused in different ways.

Maybe in a different paper, perhaps?

It would end up saving you an incredible amount of time on your next related paper. Plunk it in, tweak it a bit to fit the new paper, and "voila" time saved.

At this point, if you're like me, you're probably thinking, "I really wish I would have known about this in school."

I'm thinking I could have shaved months off my dissertation.

Let's not fret because we have so many ways we can use this idea now for our businesses!

Let's say you decide to write a blog post about a strategy to blah, blah, blah.

You can think of that strategy as being its own intermediate packet.

You can also apply it to your coaching framework.

Until this week, I didn't think of it like this, but that's exactly how I've been approaching my coaching and my content creation.

The Coaches Accelerator, my signature program, is a series of intermediate packets (modules).

Now, what's really cool is that I can take just one of the strategies or best practices from a lesson and repurpose that intermediate packet and turn it into a blog post, email, video, podcast, or even a social media post.

If you're still developing your coaching framework, then you can take all of your ideas & thoughts and think of them in terms of intermediate packets.

Then you can take those intermediate packets and repurpose them as worksheets for clients, blog posts, emails, etc.

It really comes down to redefining our work into smaller bite-sized pieces and thinking about organizing it in a way that we can repurpose it later.

I think this is where the power lies -- in the organization of your intermediate packets.

Thinking of a piece of information as it's own thing and naming it and organizing it accordingly.

A bit more work upfront, but so much more useful in the long run.

I'll probably write more about this at some point once I've had a chance to play around with this idea more.

But just thought I'd share now in case you found it useful.

P.S. In case you want to go down the rabbit hole a bit, here are some links to learn more about intermediate packets:

Ali Abdaal's video on the 10 Principles of Building a Second Brain (one of which is intermediate packets at 7:59)

How to turn a cold outreach into an ice cold contact

The 3 components of a successful coaching practice